After arriving in the area the middle of January, the United States Coast Guard Cutter Polar Star finally docked at the ice pier Thursday, January 24.  For over ten days it worked to create a channel from the ice edge to McMurdo Station.  It also created a turning basin in front of Station.

Note:  There is a webcam for the ice pier area if you would like to follow all the activities.


It was a long journey from Seattle to McMurdo for the 140 men and women on board, and I'm sure they were glad to be able to spend some time on land.  I took a tour of the ship to see first hand the living and working conditions.  Our guide, Nick, was friendly and knowledgeable.

My brother Jim, who is a tug boat captain, would have loved the tour and could have understood all the technical stuff.  He would have felt right at home on the bridge, although his is probably a bit smaller.  For me, it was just nice to get a feel what it's like to live on an icebreaker without getting seasick.


I was surprised at the thickness of the ice near the pier.  Nick said it was probably 6-8 feet thick.  But out where the channel was created it was only 2-4 feet thick.


The tour lasted almost an hour.  I stopped by the ship's store and picked up a couple of souvenirs, as any good tourist would have done.  And took one last picture. 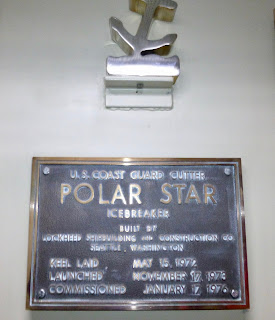 It was a pleasant outing, and I appreciated their hospitality.  But I think I'll continue my sailing on cruise ships, equipped with stabilizers and all the finer things I've become accustomed to.

I know you've been waiting a long time for this ice breaker to finally appear in McMurdo. Interesting that it came from my home town, Seattle! I'm sure the crew was happy to arrive at their final destination at the bottom of the world. QUESTION: Do they just come down to break up the ice there and turn around and go back home?

So did you take that tour at night? I get confused as to when you’re awake lol...I can’t imagine being in that boat from Seattle to McMurdo yikes

Ditto on the long voyage, yikes!

The icebreaker will be here until the supply ship leaves, and then will head back to Seattle. They will be gone for almost two months. I guess they will have a couple of days R&R in Wellington, NZ.

I took the tour around 5 pm on my day off.

The next day about 150 people from McMurdo got to board the ship and sail out to open water. It took a while for the icebreaker to pull away from the ice pier and get turned to head out through the channel. They saw some penguins and seals but no whales. I guess they also saw a Russian ship.