I promise this will the be the last post.  But I wanted to share with you one of the most powerful experiences I had while on the Ice.  And it occurred within days of my leaving.

In my last couple of posts, I mentioned that I was given time to transition back to days after working nights for nearly two months.  I also used the time to pack and otherwise prepare to leave.  For some reason it was easier for me to transition back to days than going to nights.  My body somehow knew when it was time for me to be sleeping even though it was light all the time.

On one of these days, I was in my dorm preparing to leave when the electricity went out.  Because it was a sunny day, with little to no wind, and temperatures in the teens, I decided to take a walk down to Hut Point and take some pictures.  The sea ice continued to break up and blow out, and I wanted some pictures of the mountains with the open water in the foreground.

As I made my way past the ice pier and onto the point, I saw one lone Adélie penguin standing near Discovery Hut.  I don’t know if it was a male or female, but I’m going to refer to the penguin as a male.  There were only a couple of other people in the area.  We all kept our distance, in compliance with the Antarctic Treaty.  This is the time of year many penguins molt and do not want to be disturbed.  I guess it can be an irritating and painful process.

I stopped and took a few pictures of him before heading out to the point.  As I said, it was a beautiful, sunny day with light reflecting off the water, and the mountains across McMurdo Sound were beautiful.  For over three months all I saw was ice, but now could see open water, hear the sound of waves lapping on the shore, and enjoy the smells of marine air.  What a transformation.


I took a couple of pictures of the cross at Hut Point, which is in memory of Englishman George Vince who drowned near in this spot in 1902.  While on the point I saw an Orca (killer whale) in the distance and a Weddell seal swimming along the coast line, a smart move considering Orcas prey on seals.


After taking in the scenery for possibly the last time on this amazing journey and getting the pictures I wanted, I decided to head back to the dorm.  As I passed by the hut I noticed the Adélie penguin was still there grooming himself.  I took a few more pictures of him before walking a bit further to get some more pictures of the scenery from a different angle.


As I turned back to take one last look of the little guy, to my amazement he started walking, or should I say, waddling towards me.  I couldn’t believe it.  I walked a bit further down the trail and sat down on a concrete block.  I was so mesmerized by his approach I put down my camera and just sat there.


He stopped a couple of times and would pick up a rock, carry it a ways, drop it and then find another one to pick up, all the time moving in my direction.  He finally stopped just three or four  feet away from where I was sitting.  After arranging a small pile of pebbles, he laid down and closed his eyes.

We sat there for almost an hour.  It was such a powerful experience, I had tears streaming down my cheeks.  Neither of us made any noise, nor did we get any closer to each other.  For me, it was enough just to be in his presence.  Not to attach any human emotions to him for being that close to me, all I could figure out is that he wanted something alive to hang out with for a while.  I was very happy to accommodate him.

A couple of other people came into the area, one who saw the whole episode unfold.  We both looked at each other in amazement as he continued to get closer and closer.  Another person arrived after the Adélie got settled and took pictures of the two of us together.  She got my contact information and sent me a few pictures.  I won’t post any of them here as, without knowing the entire story, it might appear that I was invading the penguin’s space.  The pictures were nice, but I didn’t need them to validate the time I spent with one of God’s incredible creatures.  Thank you.

I shared my experience with a few of my fellow shuttlers and close friends, each time resurrecting the emotions and tears.  It was an amazing way to close my incredible Ice adventure.

As a by-line, I got an email from Shuttle Ryan a couple of days after I left the Ice, with the subject line being “Someone misses you”.  The message stated “Hi Rex, Someone has followed your scent up to 140 [Shuttles office building]. He's looking for you!”.  Well, it may have been the same little guy, as there were no other Adélie penguin sightings in the immediate area at the time.  But I doubt he could follow my scent.  Still, I was pleased to get the message as it brought back good memories, and more tears of joy.  Thanks Ryan!

In one of my first posts I provided some Antarctic Basics.  Below is an excerpt:

“This continent is the highest, driest, coldest, windiest, and emptiest place on earth. An ice sheet covers more than 99% of Antarctica. At its thickest point, it is 4,776 m (nearly 3 mi.) deep. Antarctica holds approximately 90% of all the world’s ice (by volume) and 70% of all the world’s fresh water. There are many penguins and abundant sea life along the coast – but there is little life in the interior, and there are no indigenous people.”

Think about it, 90% of the ice and 70% of the fresh water in the world.  Those are significant numbers.  We used to joke about Antarctica being a “harsh continent”, and it’s true.  But I also feel it is very vulnerable.  As the earth’s climate changes, the effects on Antarctica will need to monitored.  It is my hope that the Antarctic Treaty will continue into the future, and possibly be strengthened to protect the continent.

People from back home:

In my last post I recognized people I met on the Ice who added to my McMurdo experience.  Now I want to recognize people who helped me along the way from back home.

To my family, thanks for being supportive and for the encouraging notes.  And particularly Bill and Pam for the wonderful penguin blanket and coffee cup.  They are safe and sound with me here in Bend.

To Dave and Kelly, ex-Icers , thank you for taking me and picking me up at the Redmond airport, and for keeping an eye on my place.  And to the both of you and Pam, thanks for the chocolates!

To my neighbors, thanks for being extra sets of eyes and for clearing the snow from my walks and driveway.  And particularly to David who came to my rescue by changing some batteries in my wireless thermostat to keep the heat on in the house.

To John, Joan and Jessica, thanks for the words of encouragement and the care packages, which of course included See's Candies.

And a very special thank you to one of my best friends, John, who inspired me to create this blog.  He was also my secret editor.  It's amazing how many grammatical, spelling and punctuation errors a former teacher can find.  Thanks bro! 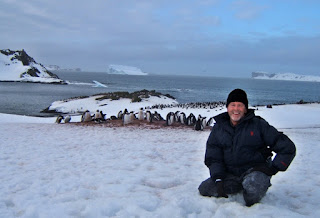 I am enjoying being home, particularly sleeping in my own bed.  And it's been fun sharing my experiences with family and friends.  During these conversations, a number of people have asked if I plan to go back.  If someone had asked me that question before I left I probably would have answered, "I think once will be enough."  Now I'm not so sure.

The Ice has a mystique that keeps people coming back year after year.  For some, it's the camaraderie of the McMurdo community.  For others it's a place to study the changes that are occurring on the continent in hopes of staving off disasters.  And for others it a great place to save money while having all your expenses paid.  I probably saved more money by not spending money, as I earned.  I'm sure there are as many reasons as there are returnees.

For me, it started a few years ago when I decided I would like to visit all seven continents before I turned 70.  It's good to have life goals, even lofty ones.  I knew Antarctica would be a tough and expensive place to visit.  When I mentioned my plans to Dave and Kelly, seasoned McMurdoites, they responded by suggesting I work a season on the Ice.  At first I thought they were joking, but after talking with them further, I decided "why not?" and applied.  It took two years but I finally got a "primary" job offer last May (thanks again Shelley!).

I did some research and thought I had a pretty good idea as to what to expect.  But when I got off the airplane last October at Phoenix Airfield, I was not prepared for what I saw.  I expected an inhospitable and desolate environment.  And although it is all the things I described above (cold, windy, dry, etc.), it was also beautiful.  It is a stark beauty, but nonetheless breath-taking.  As one Air National Guardsman from Savanna, Georgia said, "Its not beautiful like Hawaii, but it is majestic."  Agreed.


I never tired of looking at the mountains, glaciers, and volcanos the entire time I was there. I appreciated its serenity and peacefulness.  People who know me well know that I love talking with anyone and everyone (I take after my older brother Bill).  So meeting new and interesting people every time I did a shuttle or taxi run was a joy.  I also loved the driving.  Fact is, I like to work, and will probably work my entire life.

Don't get me wrong.  The hours were long and the weather conditions were not great at times.  But there is something about Working in the Land of Ice that is addictive.  So who knows.  I'll end by saying, thanks for an incredible adventure, and goodbye for now.

Oh gosh, Rex- Such a powerful ending to your long, fascinating, and glorious story! The sweet and soul-stirring anecdote about your penguin friend was absolutely priceless and will remain with you always; I'm sure. I have thoroughly enjoyed reading every single entry in your blog and wish to thank you for taking me/us along for the ride to see and feel this most amazing continent through your eyes, thoughts, experiences, and well-crafted words. Job well done, Sir!

Rex--All good writers benefit from good editors...and so do their readers. But this was a story only you could tell and I'm so grateful you shared it with us. You say you like working, but it's clear you are driven as much or more by your servant's heart. Hugs, Mary